Wednesday evening, September 13, 2017, at 9:59 p.m. CDT, Saturn reaches eastern quadrature as Saturn, Earth, and Sun form a right triangle.  Eastern quadrature is so named as Saturn is 90° east of the Sun.  This is the time when Saturn presents to us its most gibbous phase.  Even so, Saturn will be 99.7% illuminated due to its great distance from us.

A more noticeable effect will be the shadow of Saturn on its rings, a phenomenon best seen at eastern or western quadrature.

Saturn will only be 12° above our horizon in SW Wisconsin at the exact moment of eastern quadrature Wednesday evening.  Earlier that evening, Saturn crosses the celestial meridian at 6:51 p.m.—22 minutes before sunset.  If it weren’t for daylight, that would be the best time to observe Saturn: when it is highest in the sky and we are seeing it through the least amount of atmosphere.  If you have a telescope equipped with a polarizing filter, you can significantly darken the blue sky background around Saturn since the planet will be exactly 90° away from the Sun, where the scattered sunlight is most highly polarized.  Rotate the polarizer until the sky is darkest around Saturn.

Speaking of Saturn, the Cassini mission will come to a bittersweet end on Friday, September 15 around 5:31 a.m. CDT when the storied spacecraft, which has been orbiting Saturn since June 30, 2004, will have plunged deep enough into Saturn’s atmosphere that it is no longer able to point its high gain antenna towards Earth.  Soon after that, Cassini will burn up in Saturn’s massive atmosphere.  We on Earth will not receive Cassini’s last radio transmission until 1h23m later—at around 6:54 a.m. CDT.

Emily Lakdawalla, who is arguably the best planetary science journalist in the world these days, includes the visual timeline of Cassini’s demise shown below and in her recent blog entry, “What to expect during Cassini’s final hours”.

It may be a while before we visit ringed Saturn and its retinue of moons again.  But further exploration of Titan and Enceladus is certain to feature prominently in humankind’s next mission to Saturn.  Hopefully, that will be soon.

Wednesday evening, July 5, around 9:40:17 p.m. CDT, Jupiter reaches east quadrature, which means it is 90° east of the Sun.  In other words, the Sun-Earth-Jupiter line most nearly forms a right angle. 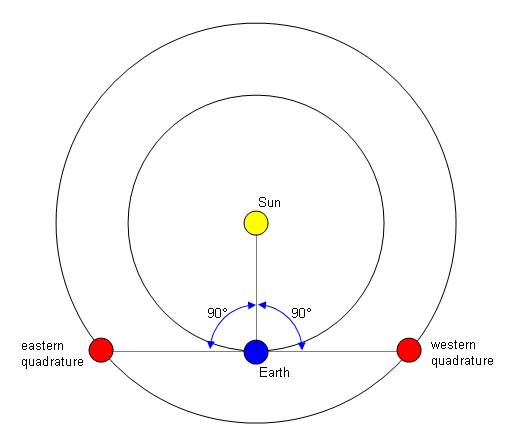 The best time to attempt daytime viewing of a superior planet like Jupiter is when it is at quadrature.  Then, we are looking at it through a region of the sky where reflected sunlight is most strongly polarized.  By using a polarizing filter with a telescope eyepiece, and properly rotating it, the sky background can be significantly darkened, allowing surprisingly good views of the planet during twilight and even daylight.

Jupiter reaches its most favorable viewing position when it crosses the celestial meridian, where it reaches its highest altitude, due south.  Wednesday evening, that occurs at 6:58:18 p.m. (Dodgeville) when the Sun is 16° above the horizon, 1h44m before sunset.  Use a polarizing filter for the best view of our solar system’s largest planet around this time on Wednesday, July 5—or the closest date that affords you clear skies.