We are presently witnessing a rapid transformation of our outdoor nighttime environment as many older lighting sources such as high pressure sodium, metal halide, and fluorescent are being replaced with solid state lighting, specifically light emitting diodes (LEDs).  Many of the lighting decisions being made today with little or no citizen input will have consequences that impact our nighttime environment for decades.

Rather than continuing to subscribe to the “more is better, dusk-to-dawn” approach to outdoor lighting, we need to utilize this new technology in creative and innovative ways (many already available) to improve our nighttime built environment while minimizing lighting’s deleterious effects on the natural world.  Three paradigm shifts are needed.

When choosing the amount of light you need, one should always consider the task or tasks needing to be performed.  For example, the amount of light needed to identify a rural intersection is much less than is needed to play a baseball game at night.  In both cases, though, the light needs to be restricted to only the area needing to be illuminated: the intersection or the playing field.

Another example.  When my wife and I bought a house in Dodgeville, Wisconsin back in 2005, our front porch had a 100-watt frosted incandescent light bulb to light the porch that we could turn on whenever we had company in the evening.  Thinking it too bright, we replaced the 100-watt bulb with a 60-watt bulb, then tried a 40-watt bulb, and finally a 25-watt bulb.  The 25-watt bulb adequately illuminated the porch and the stairs leading up to the porch, so in it stayed.

Then there is the issue of dusk-to-dawn lighting.  Many years ago, we switched outdoor lighting on or off as needed, but technological advancements later allowed us to have a light come on at dusk and stay on all night until dawn.  Now, think of all those lights burning when no one is there to use them.  If security is a concern, there is even newer technology that will do a far more effective job of detecting intruders than simply leaving a light on all night long.  In fact, a dusk-to-dawn light is not needed at all as part of an effective security system.  So, why not use 21st-century technology to have outdoor lights automatically turn on when needed and turn off when not needed?  Some LED light bulbs even come now with integrated occupancy sensors.  Lighting on demand could and should be replacing most dusk-to-dawn lighting within the next few years.

What about some roadway and parking lot lighting that must remain on all night long?  Those lights could be at full brightness during times of high traffic such as during the evening hours, but dimmed to 50% when traffic is lower, such as after midnight.  Once again, 21st-century technology makes this easy to do.

LED lighting lends itself very well to frequent on-off switching and dimming, but much of what is currently being installed is too blue.  As you can see in the table below, typical LED light sources have a substantial “spike” at the blue end of the visible light spectrum as compared with other white light sources. 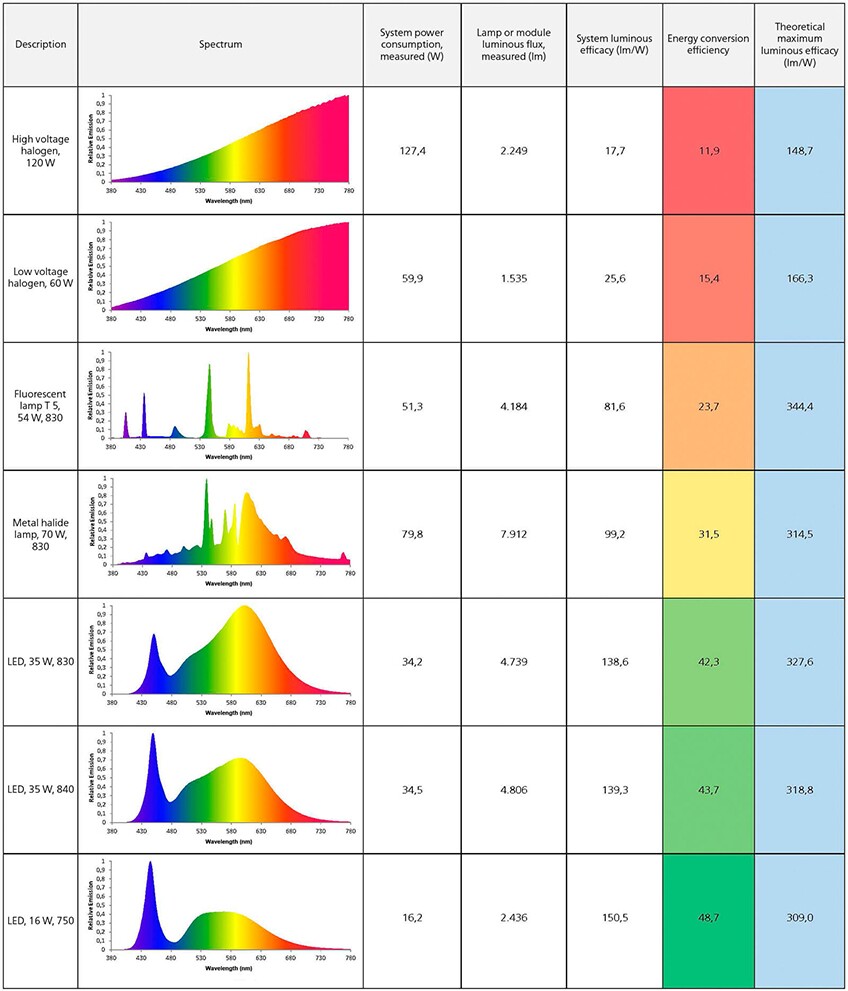 Not only does blue light scatter more in the atmosphere and within our eyes, but many people perceive bluish-white light as colder, more clinical, than the warmer white light where this blue spike is absent, as shown below.  The blue spike in LED lighting can be removed either by using filtering, or by using a different phosphor that gives a warmer white spectrum.  Strongly preferred for both indoor and outdoor lighting are LED light sources with a correlated color temperature (CCT) of 2700K or 3000K.  2700K is the standard for indoor lighting, and yet 4000K is most often used for outdoor lighting.  Why?  Let’s move the standard for outdoor lighting to 2700K or 3000K.

By properly shielding lights so they only shine downwards, by using lights that are no brighter (or bluer) than they need to be, and by turning lights off when they are not needed—or dimming them during times of lower activity—we all will be helping to improve both our natural and celestial environment.

Turn Down the Lights, Turn Up the Stars *

In thinking about 21st-century lighting, one’s thoughts naturally towards 21st-century power generation.  We do not think often enough about the many advantages of a more decentralized power grid, where nearly everyone is generating some power with solar panels and small-scale wind turbines, as well as other local sources of energy such as geothermal.   As we once again consider building nuclear power plants (which will still be quite vulnerable to terrorism) and continue to build expensive fossil fuelish power plants and ugly high-voltage transmission lines, why not a paradigm shift towards decentralized energy production instead?